Ah, Moscow…what does a girl do on a Saturday night? A hot date with myself at the ballet, of course! That’s right, I went to the Bolshoi to see Lady of the Camellias and as soon as I define Camellias and find the synopsis in English, I will share. Though not before I figure out exactly what I watched first.

The real take away here is that while I’ve never been to the ballet, or expressed a modicum of interest in it, I felt this was necessary to do. The Bolshoi is a world famous stage and as such, I needed to pay it a visit. Especially since I could throw a rock from my hotel window and hit the building.

The show started at 7pm, and it was recommended I arrive at 630 to enjoy the theater a bit and find my seat. No problem. I was just going to lay my head down for a moment and close my eyes, so I set my alarm for 6pm leaving me time to freshen up and walk one whole half block. I was mid dream when I thought it felt like a long 15 minutes. I opened my eyes to find out it was 715. OH NO! I scrambled to get ready while having visions of my big dumb American body blocking the view of all the stately Russians who simply wanted to enjoy a night at the ballet. I ran over to the theatre and to my relief people were still entering the building. Huh, maybe I wasn’t that late.

I entered and found myself comically unable to communicate with just about everyone. I also sort of loved it. After wandering around the fantastic halls and even grander ballrooms filled with antiques and costumes of black swans past, it was time to start the show. I got to my seat courtesy of the nice lady for whom lip liner was a must but actual lipstick was optional. She tried in vain to point me in the right direction, but instead gave up and sat me which is kind of like, you know, her job. So I sat front row in what can only be described as a chair from a child’s playroom tea table.

The theatre itself is so fantastical, extreme and flat out dreamy, I couldn’t believe such a place existed.  Ornate gold scrolling, a chandelier the size of a small apartment – it was all quite magical. 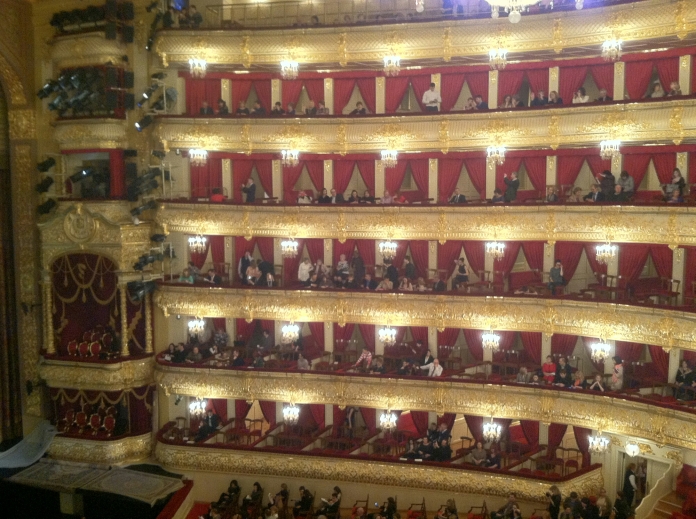 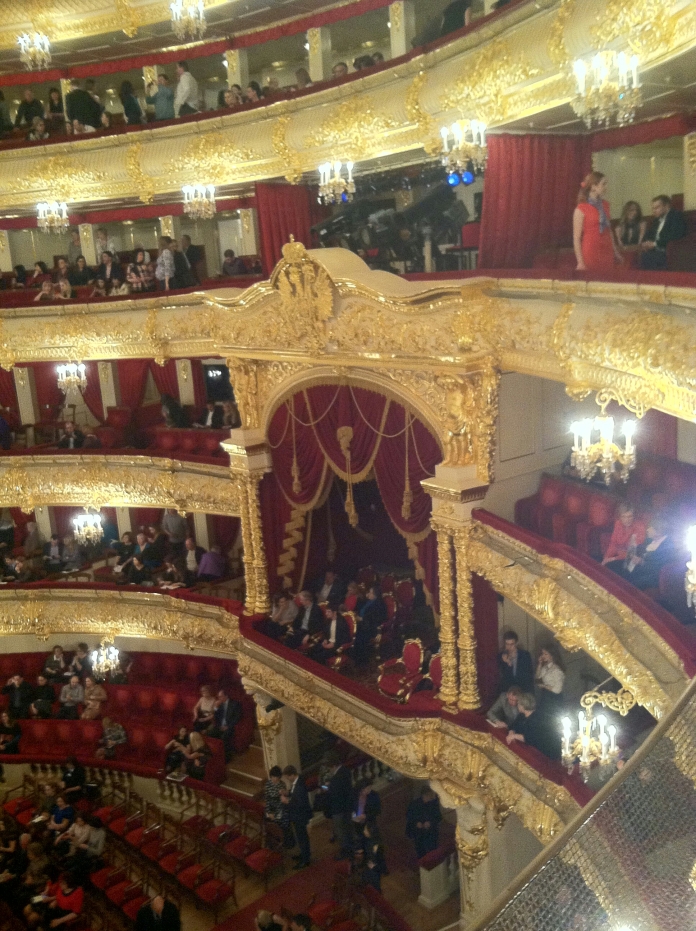 And then it began. I admit I was worried I wouldn’t make it through 3 hours of this ‘dancing.’ But I was so, so wrong.

The dancers truly looked like they were floating.  They bent at impossible angles, convincing me they had no bones, made just of flexible cartilage like in the ear or nose. Three hours passed, I never blinked. And before I knew it, the show was over. I’d now have to unwedge myself from the wee chair I’d become one with.

And they don’t want you taking pictures during the show. So there’s that.

After I’d successfully separated myself from chair #5, I wandered back down the marble stairway and outside into the cold. It had begun to snow, and I got to experience some Siberian flurries.

I got back to the hotel at 20 past 11, thinking to myself how remarkable that something like the ballet would start a whole hour late. But who I am to judge? I’m just a visitor in Moscow…